In My Beauty, fashion and culture’s most compelling faces reveal in their own words what beauty means to them

Beatrix Ost is an artist, writer, film and theatre producer, designer and actress with a love of aphorisms. At 75 years young, she has no intention of stopping soon. To know Ost is to feel her – her vivacity and magnetism is so strong, it’s almost palpable. Donning her characteristic turban and red lip, Ost is the very definition of savoir-vivre. She’s an empress of eccentricities.

It’s this true individualism that’s been such a draw to the likes of photographer Bill Cunningham, and has led her to be featured in titles such as Vogue, Harper’s Bazaar and Vanity Fair. She’s also landed the cover of New York Times magazine and is a frequent fixture on Ari Seth Cohen’s renowned blog, Advanced Style – not to mention the fact that the German-born sartorialist also ran in the same circles as David Bowie and Andy Warhol. The latter, however, never piqued her own interest. “I was so unimpressed and naïve about Andy,” she explains. “All he ever said about anything was ‘Oh, gee. Oh, wow.’ I found him to be an incredibly boring person.” Here, the inimitable style icon talks blue hair, forehead tattoos and how to turn horror into happiness.

“I remember there was nothing in post-WWII Germany when I grew up. There were no stores to shop in, so nothing was bought. Everything was bartered, so I began to invent. I think that the lack of resources is what allowed me to seek out my own style. It taught me how to repurpose things around me. In Germany at that time, you could see right away when somebody had that joie de vivre, when someone was moving forward with happiness instead of retreating back into the war with sadness.” 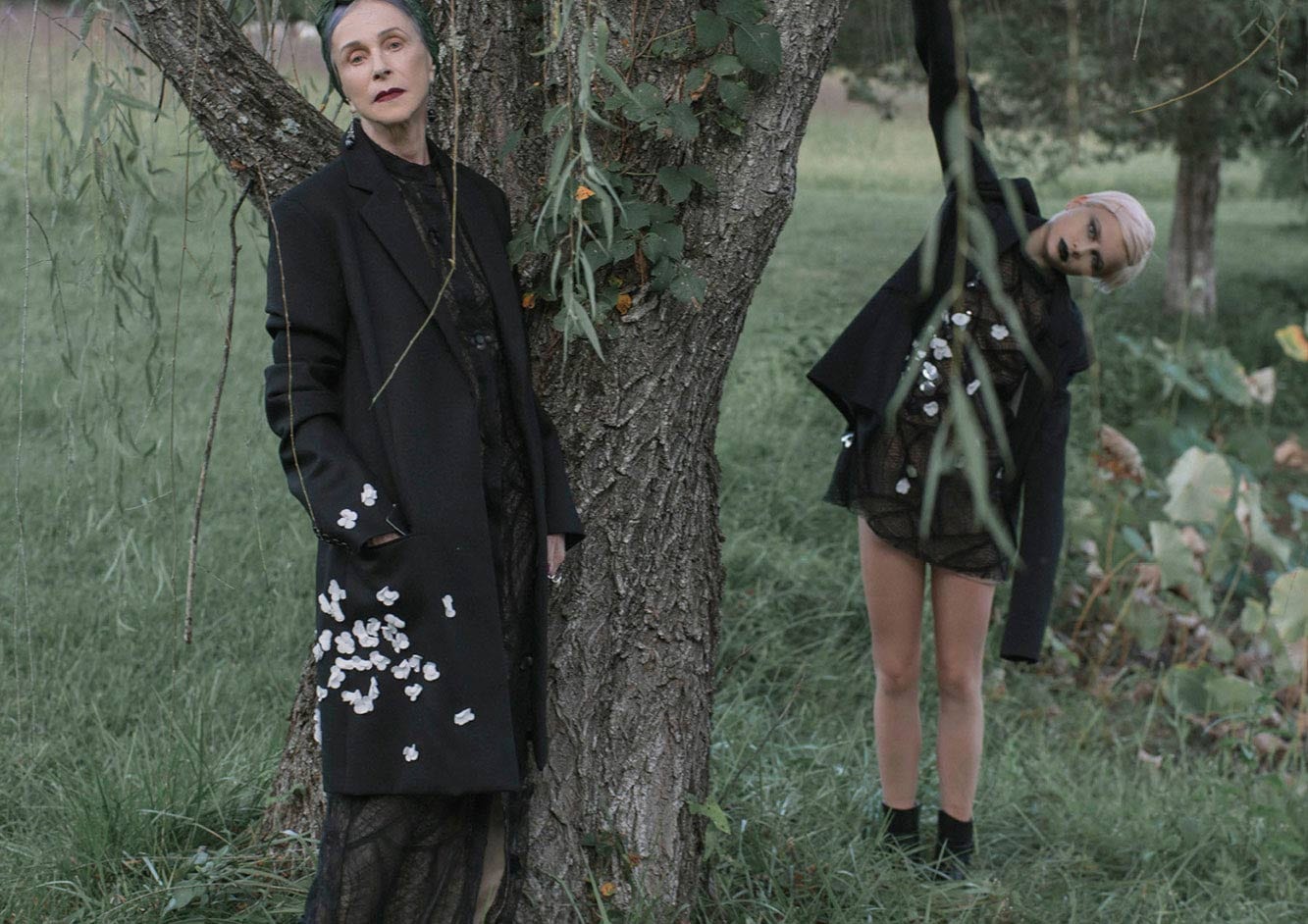 “I think the trend of older women owning their sense of self and embracing their style specifically comes from this generation…We’ve been rediscovered. You cannot ignore us.” – Beatrix Ost

“My older sister was the beauty of the family. I was the brain. But my sense of style developed very early. I used to wear dresses turned upside down or inside out. People were bemused by me. When I was 14 and we lived in Munich I was discovered by photographers, and I came home with a bag of money for having been photographed. I showed my father and he said, ‘There you go. You got brains. Nobody would ever pay so much money for somebody to be photographed. But for you, one knows you are clever.’ I was told people were interested in me not for my looks, but for my wit.”

“I’ve never tried to fit in, but I’ve also never started the day by thinking, How can I stand out? To this day, I’m not aware of my style. It’s apparently just intuitive. And I’m astounded by the reaction to it all, because it’s so easy for me. It’s in my nature; it’s so me that it isn’t exhausting. It just is. So maybe, then, if my style was never a challenge for me, I’m not so clever after all!” “I’ve worn red lipstick since very early on at age 15. It’s always stuck with me. I’ve never ever worn any colour other than red. I think it’s because after the war, red lips were a thing, and it could be that this was my first really strong impression of beautifying yourself. It’s become a symbol of beauty to me. I always use M∙A∙C Lipstick in Diva. It’s always the same.”

“My hair is blue or purple depending on how much I wash it. The colour washes out a little, so you can’t control the shade. I would say I’ve had this colour now for 15 years. When my hair turned grey, I always wanted to show the grey, but I wanted something else too. I needed a little more colour. I saw a group of kids on the street in Charlottesville, Virginia, where I have a farm, and one had blue hair. I just thought his blue was cool. I’ve been dying my hair that colour since then.”

“I think the trend of older women owning their sense of self and embracing their style specifically comes from this generation. After 65, you just become a forgotten age and a forgotten person. But we’ve been rediscovered. We’re the baby-boomers, after all. It’s a huge generation. You cannot ignore us. It’s such an interesting time to be alive at this age. Also, because we know we don’t have endless time anymore, we tend to now utilize these years very wonderfully. You can almost call it a second teenage time. It’s a reawakening into the end, towards the end.”

“Beauty’s so hard to define, but I think it comes from the inside out. It’s much more who you are than what you are. When you’re fascinated with someone and they look so alive, that’s beauty. Today, people do so much with their faces. Even young people are obsessed with perfectionism. I think perfection is a bit suspicious. I’m more attracted to someone’s presence than their look.” “I wanted to keep it and make the horror into a beauty mark, so I got the scar tattooed. I decided to celebrate it.”
– Beatrix Ost

“I’ve learned to turn a horror into something beautiful. I’ve had skin cancer on my forehead twice. The second time left such a large hole, which I was worried was going to change my facial expressions. I told the doctor he had to think of something, so he closed it the best he could, which left a jagged mark on my forehead. But I wanted to keep it and make the horror into a beauty mark, so I got the scar tattooed. I decided to celebrate it. To look at it as a cool sign. In the beginning, people said it was a reminder of something negative. But everything has a positive side. Everything is sent to you to be turned around. Illness is there as a lesson for growth. So I say, this is a reminder of my positivity. Now, I don’t even think about the tattoo. It’s just so a part of me.”

“I feel the most beautiful when I’m healthy, when I feel good inside. I also never have any negative feelings. I have no inner animosities. I’ve trained myself not to have them. I make sure I clean up when I have feelings that aren’t so great. I’m always mentally getting rid of things. I don’t have lingering emotions. And I think that makes me feel very good, which is a feeling of beauty. It allows you to be in the moment and be able to recognize when the sun in shining. I’ve learned how to live inside out. To clear yourself, you have to be conscious. It takes effort, but I was never drawn to negativity, anyway.”

“My recommendations for finding beauty? Be still. Be alert. Be awake. Draw from the inside. Look for happiness. In your body is a good place to be.”